Whew, been a minute! Since I last posted, VERGER had its public debut at MAGFest near Washington, DC (coincidentally the landscape of the first 27 years of my life — fuck i'm getting old).

I've been to MAGFest a few times (with BIT RAT), and I really appreciate how much the event privileges *playing* games rather than pitching or selling them. For four days, I got to watch 100-odd people suffer through my tutorials and try to survive a season or two of beast-hacking. *smiling by accident, not bc i'm a big dork

The threat of real human strangers touching your game is usually a great impetus to fix broken shit, and this was no exception. I even got to tweak stuff at the venue, which meant the build I shared on the last day was a bit more polished and balanced than what I showed up with.

More importantly, I got so much generous and patient feedback from folks across the game-playing spectrum. Not unsurprisingly, there was a bit of a learning curve for people who don't already know/play roguelikes, but in general they got the hang of it quickly, and some even left without throwing down their controllers in barely-controlled fury.

Best of all, a few kind wizards offered suggestions that have made crucial elements of the game SO MUCH BETTER. One of these (mapping melee attacks to the d-pad) seemed so obvious in retrospect that I still can't stop talking about it. People also had nice things to say about the visual and sound design and the whole roguelike-disguised-as-zelda angle, which was extremely validating.

The biggest downside of exhibiting at an event like MAGFest is that you don't get to play nearly enough of other people's games. I was lucky to spend a little time with Spinch, Junkpuncher, Kickbot, Cold Calling, and Crescendo, all of which I'd highly recommend checking out. Lovely folks and beautiful rad ideas and implementations!

So, where does all this leave me? Pretty near ready for a public prototype of some kind, I think. Between an unexpected intra-city move and other life ups-and-downs, the weeks since we returned from DC have been logistically awful, but I'm most of the way through my checklist of improvements and fixes, including:

My remaining goals for the next week or two are:

Once these are up and running, I need to decide how to go about my initial release: free demo, "early access", some kind of paid prologue. I hate this part of the process, both because it's the aspect of game dev I'm the least comfortable with (experientially and politically) and because it stirs up all my anxieties about how to make this work more sustainable in the long-term.

That said, I'm gonna keep plugging away and hope for the best. And, of course, I'm more than open to suggestions!

This post was a little image-sparse, so I'll leave you with my MAGFest poster, which actually looked pretty rad blown up to 6ft x 3ft with pixels the size of rubik's cubes. 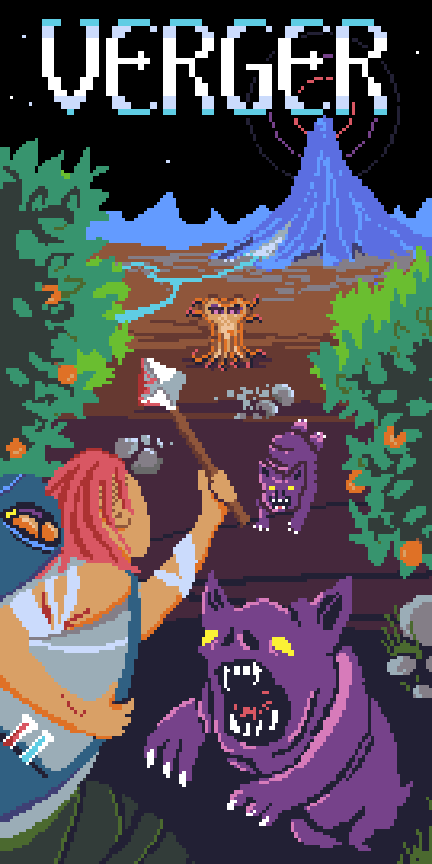 man I keep seeing these updates, buy I just wanna get lost in your game x3

lookin good, keep being a dork - it works for you

thanks; doing my best to get it into the world! shouldn't be long now! appreciate you keeping it on your radar.

i read every report ^^b it's interesting